This week I made the much anticipated transition from summer vacation to school year. My head is still filled with the glory of campsites and kayak mornings and swimming pools, even as I find my body in a stuffy little speech room poring over caseload lists and IEP dates. I know that my summer activities serve to refresh and renew my professional self, but sometimes there is a more direct connection.

One of my favorite reads this summer was Boys In the Boat, by Daniel James Brown, the story of the unlikely victory of the University of Washington men’s rowing team at the 1936 Berlin Olympics. It was not a book I had planned on reading or that I would have thought would have much connection to my professional life, but the story has stuck with me and I find myself thinking about those nine men in a boat as I begin my school year this fall. 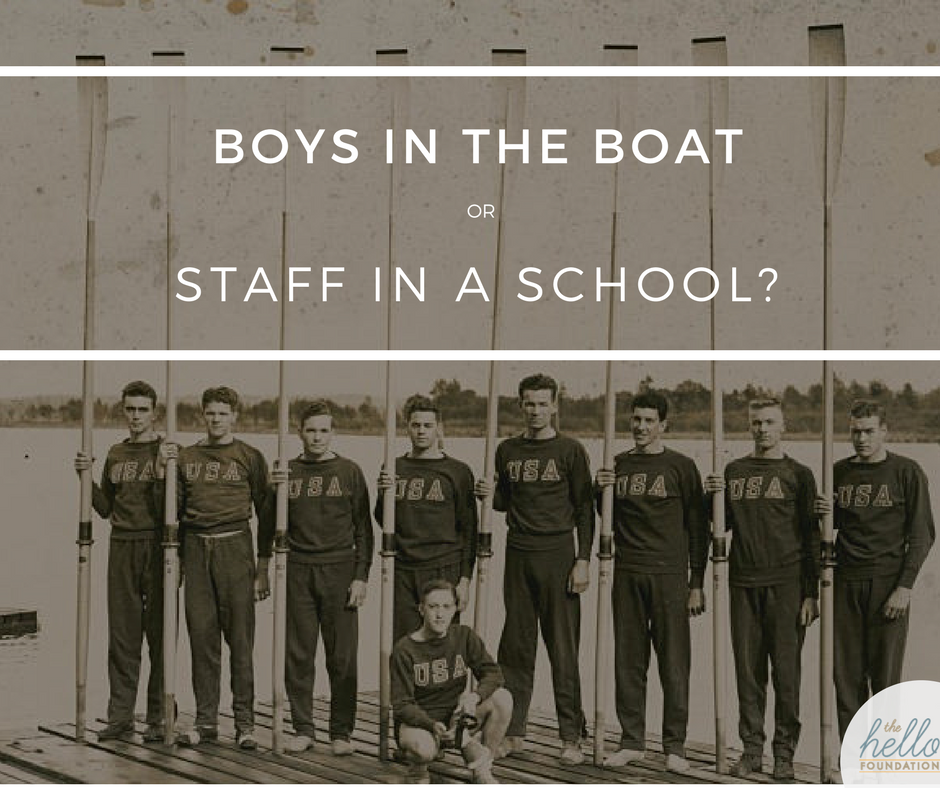 Whether grad school and job interviews are still fresh in our memories or a thing of the distant past, we got to where we are because we were able to compete and win. We fended for ourselves. Like Joe Rantz, we learned to forage in the proverbial woods and build brawn through long days hard work. We had to compete and look out for ourselves to get into grad school, to get a job, to get that next position.

But now, as an SLP in the schools, we find ourselves in a situation we cannot win on our own. Whether advocating for a student or looking for efficiency in the sea of paperwork, it is not a job that can be done by out-competing our co-workers. Cooperation is the name of the game when you are working on a team – and school-based SLPs are on many teams: speech/language teams, SLP/SLPA teams, building sped teams, student-specific teams, and so on. We only win when we pull together.

If you’re going to get up at five in the morning in the cold water in February and put yourself through that kind of torture day after day, which is what they have to do, there’s a mental toughness that comes in. To me, it’s as remarkable as their physical toughness.

But [crew members] also have to be amenable to fitting in with other people. I know from a crew coach’s point of view it’s hard to find people who can combine those two things: the mental strength and the social skills.

The first lesson I learned coming out of grad school was that I hadn’t learned everything. Since that day, I have been reading and watching and working to pick up more specific skills to benefit the kids I work with. It’s still sometimes hard to believe that I’m supposed to be the expert at the table, but as an SLP, I do bring unique skills and experience to my school-based team. It’s a lot of information, from many sources, on the gamut of approaches and disorders — that’s the SLP version of the ‘mental toughness’ Brown sees in rowers.

And yet, all that knowledge is of no use if a school-based SLP does not have the skills to build bridges and create working relationships with co-workers and parents. There is a balance necessary between knowledge of the current research, and the ability to ‘sell’ the approach to the team, the family, the students.

In recent years (with maturity?), I have realized that there are times when we may actually have to do less than what we know is best, or agree to an approach that is less than best-practice, in order to build relationships for the future. When we show that we can listen and attend to the needs of the team, we build trust and connection — the only hope we have of actually “pulling together”.

After all, if the sons of loggers, shipyard workers, and farmers were able to defeat elite rivals first from eastern and British universities and finally the German crew rowing for Adolf Hitler in the Olympic games in Berlin, 1936, certainly a team of special educators united for a cause can overcome whatever is thrown at us this year!